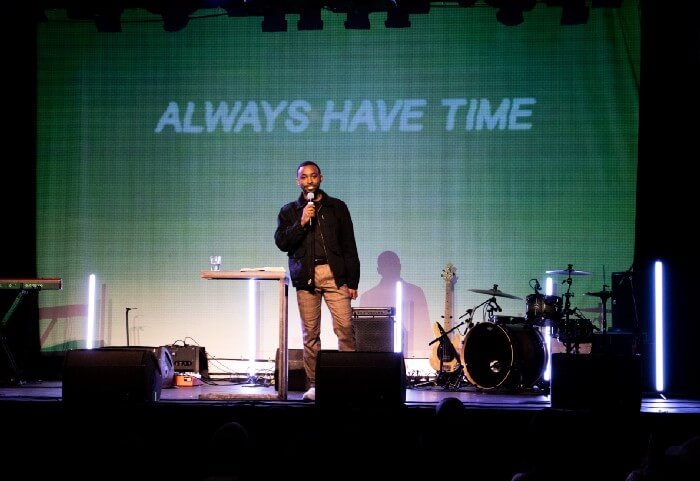 Many individuals have a difficult time with public speaking and find it challenging to master their anxiety in front of an audience. However, contrary to what many individuals believe, the root of this longstanding terror is not in the act of public speaking itself. Rather, according to research by cognitive behavior psychologists, the real fear is triggered by a looming fear or failure — which is exacerbated by the fact that this perceived and projected failure would be discovered by others, rather than kept under wraps.

This is why many individuals — including those who are quite courageous and bold in other areas of life — will go to extreme lengths to avoid public speaking or would gladly pay someone hundreds or even thousands of dollars to bear the burden on their behalf. It is a paradigm that Pastor Courage Igene, the Founder and President of All Nations Church, understands all too well.

“I travel across the U.S. giving sharing motivational and spiritual messages to groups of all sizes, including very large gatherings,” commented Pastor Courage Igene. “And over the years, countless people have come up to me and asked what my secret is for being such a charismatic public speaker. Well, there is no secret! Anyone can cultivate public speaking skills if they are willing to practice, if they are prepared, and most importantly if they pray and open their heart for Divine guidance.”

Indeed, the benefits of public speaking that Pastor Courage Igene refers to go far beyond merely being able to stand behind a microphone without shaking. For example, here is what people can look forward to once their sleigh their fear of public, and turn it from an enemy into an ally:

· A dramatic boost in confidence that extends into all areas of life. This courage can and often does translate into job advancement, or for some people, the strength they need to change careers and follow their true passions.

· A larger social network. Adds Pastor Courage Igene: “With apologies to social media companies like Facebook and LinkedIn, I believe that old fashioned public speaking is the best way to meet new people and spark lasting relationships. I have met so many wonderful people through public speaking!”

· Better listening skills. Surprisingly, one of the greatest benefits of public speaking is that it improves listening skills, because people start to pay much more attention to what others are saying to them. They go from passive listening to active listening, which shifts their communication ability to a whole new level.

· Public speaking is also a crucial aspect of both personal and professional development. Speech preparation requires critically thinking and encourages individuals to step out of their comfort zone.

Concludes Pastor Courage Igene: “The first step is always the hardest, but people who take a leap of faith and embrace the pillars of practice, preparation and prayer will not need to search for proof of success. They will be the living proof!”